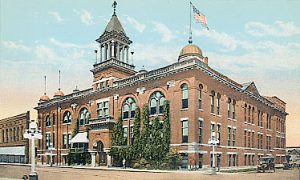 On March 10, 1920, a meeting of Fargo Masons not affiliated with Shiloh Lodge No. 1, was held at the Fargo Masonic Temple. About forty Master Masons were present. It was unanimously voted on to proceed with the formation of a new Masonic Lodge in Fargo.

It had been hoped that fifty signatures would be secured for the petition for the new lodge, so the officers were delighted to find one hundred seventeen Master Masons eager to become charter members. Shiloh Lodge No. 1 gladly signed the recommendation for a dispensation as sponsor March 12, 1920, and later, the officers of East Gate Lodge exemplified the degrees of Masonry on a class of eighteen candidates for Shiloh Lodge, thus proving their efficiency in the ritual. The dispensation instituting East Gate Lodge U:.D:. was granted on March 24, 1920.

The charter was granted June 16, 1920, by the Grand Lodge of North Dakota. The charter named one hundred seventeen charter members. The constitution of East Gate Lodge took place in the Masonic Temple in Fargo on the afternoon of November 27, 1920.